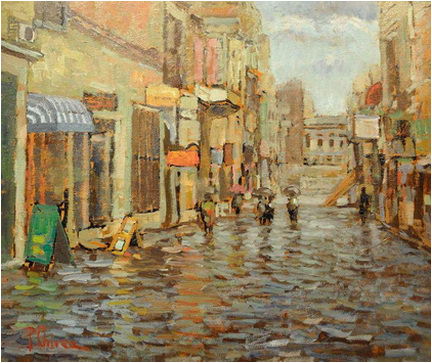 According to Huffington Post, Bucharest has at least 5 reasons to consider itself the Paris of Eastern Europe, even if, according to Wikipedia, there are at least 20 cities that fight for this honor.

Eiffel Tower and Mona Lisa aside, Bucharest has a lot like Paris to offer. Bucharest is the go-to for diplomatic convenes, and the sophisticated host to the George Enescu Festival and International Competition (classical music festival). Just as refined as you’ll find some, others are equally retro — Bucharest boasts a young, edgy nightlife.

Well, there was a time, long ago, when Bucharest was indeed named the Little Paris. It was a cute little city then, and the nickname provided a much needed justification for thinking it belonged to Europe as opposed to being an exotic, far eastern, almost ottoman city.

I think Bucharest surpassed that inferiority complex and shaped its own identity decades ago. Think of Neo-Romanian architecture, Modernism, Palace of the Parliament, Old City center, Village Museum, recent communist past , churches moved on rails, revolution, ciorba de burta, mici and shaorma. Little Paris? I don’t think so…There is no other city like Bucharest, with so much history, so scarred, frustrating, so full of life, so crazy and so beautiful if you know where to look.